Delta and the mill

Nice little village is Delta. It took its name from the shape of Lower Beverley Lake which is like the Greek letter. First the long view. 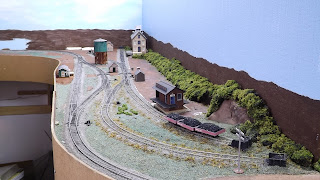 And the mill building, which is interesting in its own right. This is a RDA kit Easton mill. I really didn't like the loading dock that came with it, so made my own. It was quite a build. Forget using a sharp #11 blade to cut from the sprue, a machete worked better. The wall sections had to be sanded down so the edges were a 90 before they could be glued together (the instructions showed a shiplap joint, but they weren't molded that way), It wasn't all bad though. The walls and roof are thick enough that they won't need any liner to prevent light coming through, and the windows were separate pieces to make painting easier. Also it came with spare wall pieces, which are going to get used as a flat in Westport. 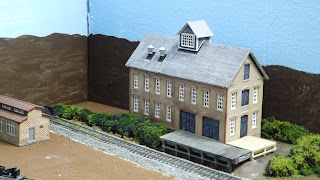 The real mill was the most modern building of its kind in Upper Canada when it was first built in 1812. It was fully automated from day one, and was a two man operation. One Lackey, and one Boss to rake in the Coin. By our era the wheel had been replaced by a pair of turbines and the mill was converted to electrical power. There was sufficient to supply all 12 houses in Delta with a light bulb, but if your wanted to pay double you could have two bulbs. The village of Lyn, by comparison, didn't get electricity until 1927. There is a story that the Owner was walking through the village one evening and saw one house brightly lit and knowing they only paid for one light went to see what was going on. He found they had creatively used strategically positioned mirrors, so he charged them as though they had two lights anyway.